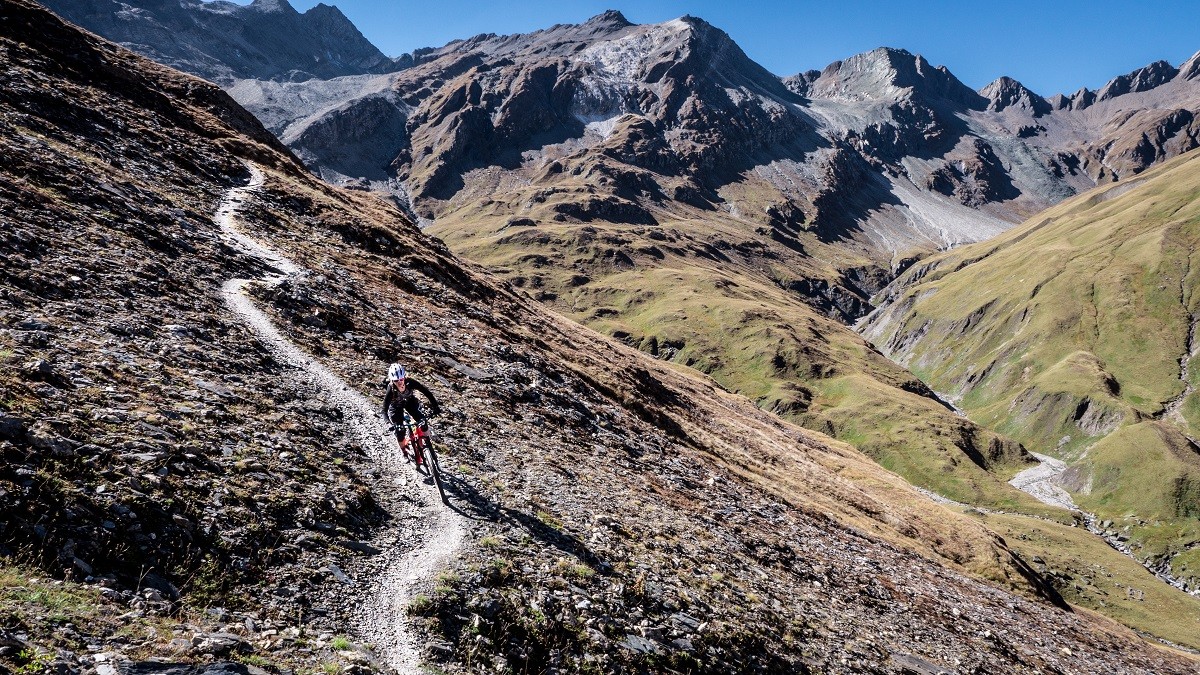 RATING SINGLETRACK  IN THE AUSTRIAN ALPS

The singletrack scale (STS) for MTB trail difficulty ratings is divided into three general levels of difficulty: Easy, Moderate and Difficult. These are indicated by the respective Blue, Red and Black markings usual for ski slopes. These classes are based on the skills of an average mountain biker with a properly maintained modern mountain bike.

For a more concrete classification and accurate differentiation of mountain bike trails, six relatively well demarcated levels, known as the S-Grade, are used to classify trail difficulty: S0 to S5. For an average rider, the lower end of the scale is “Easy to Ride” and the upper end “Too Difficult”.  The difficulty Class Easy comprises the degrees S0 and S1, Moderate S2 and Difficult. S3 and above.  The STS is open top at the and limited to the difficulty of a flat path at the bottom. The entire range of S-grades is primarily intended to the description of singletrack.

The singletrack is classified on the basis of the dominant trail characteristics under ideal mountain biking conditions, such as sufficient daylight and dry ground. The classification is thus independent of and not influenced by subjective or variable factors such as:

When orienting to S-grades, it should therefore be noted that the driving-technical requirement can shift significantly upwards, for example, due to poor weather conditions or faster speeds.

The following are the criteria of each S-Grade used for the MTB trail difficulty ratings. More information and examples can be found on the detail pages, which are linked via the above navigation menu. For printing, you can alternatively use this PDF document.

S0 describes a singletrack that has no particular difficulties. These are mostly flowy forest and meadow paths on non-slip natural soils or solidified gravel. Biking over steps, rocks or root passages are not expected. The slope of the path is easy to moderate, the curves are wide. [»More]

On a trail described by S1, one must already expect smaller obstacles such as shallow roots and small stones. Isolated gullies and erosion damage are often the reason for the increased degree of riding difficulty. The subsoil can be occasionally loose. The gradient is a maximum of 40% (22 degrees). Switchbacks are not expected. [»More]

On S2 mountain bike trails you have to expect bigger roots and stones. The soil is often loose. Steps and flat stairs are to be expected. Often there are tight curves and the gradient can reach 70%. (35 degrees) [»More]

Blocked single trails with many larger boulders and / or root passages belong to the S-grade S3. High steps, switchbacks and tricky sideslopes are common; relaxed rolling sections are rare. You can usually count on slippery surfaces and/or loose scree.  Steep slopes over 70% (35 degrees) are common. [»More]

S5 trails are characterized by blocky terrain with ridges, boulders and landslides, loop-like hairpin bends, and high obstacles like fallen trees – all often in extreme steepness. Obstacles must be mastered in succession with little braking distance and without opportunities for rest. Considered by all but the most skilled mountain bikers to be “unrideable”. [»More]

Not all factors have to be fulfilled in order to assign a passage to a certain S degree. A singletrack may also have different difficulties in passages or sections. The trail difficulty may be described as “S2 with two S3 passages”.

For ease of classification, the STS is divided into as few as possible distinct S grades. It is also common to see the use of plus and minus sign to further subdivide the classifications. A trail characterized by S2 + has a more sophisticated character than you would expect from an average S2-level trail. Since there is no defined boundary between a plus-grade and the minus-grade higher in difficulty (eg, between S2 + to S3-), one needs some experience of this fine-tuning. However, such an accurate classification is usually not necessary either, since the S-grade itself is usually sufficient.

This website uses cookies to improve your experience while you navigate through the website. Out of these cookies, the cookies that are categorized as necessary are stored on your browser as they are as essential for the working of basic functionalities of the website. We also use third-party cookies that help us analyze and understand how you use this website. These cookies will be stored in your browser only with your consent. You also have the option to opt-out of these cookies. But opting out of some of these cookies may have an effect on your browsing experience.
Necessary Always Enabled
Necessary cookies are absolutely essential for the website to function properly. This category only includes cookies that ensures basic functionalities and security features of the website. These cookies do not store any personal information.
SAVE & ACCEPT
Open chat
Hi 👋
Wie können wir dir helfen?